skip to main | skip to sidebar

Figured out my login!

I've been meaning to update my blog for, like, ever.  I couldn't get logged in due to my airheadedness and time constraints.

Anyway, lots happening.  We started a rock band several years ago and that's doing well despite our ages.  I'm no longer the second oldest in the band; we took on an electric violinist along with his wife who is now our keyboardist.  Our lead guitar WAS the oldest (only six months older than me) until the elex violin began.

Because this district (Tanque Verde USD) uses the traditional K - 6 elementary model and the 7 - 8 Junior High model I only see my 6th grade band students twice per week...sometimes only once.  That puts us way behind the other schools in the state who use the 6 - 8 Middle School model.  This means we have lots of catching up to do in 7th grade.  We are able to get pretty much caught up in the 7th grade year due to several factors: First, the students tend to be pretty focused both academically and musically; second, the parents are very supportive and third, the administration in the district is supportive of our endeavors.

Many of my Jr. High students go on to the district's high school but some will go to a private high school or two another academically challenging high school in (shudder) TUSD.

Posted by BassHorn at 14:09 No comments:

Most, if not all, have very strong opinions about his performance in office.  Some absolutely are enamored with what he has accomplished while in office - and he has had accomplishments.  Some, on the other hand, believe he has weakened the country and lessened our status as a world power.  He did say he would fundamentally change the United States of America.

Again, some believe he has done good things, others, bad.

Whichever you believe, perhaps the most important thing to do is place his accomplishments alongside the Constitution of The United States of America.

With the Constitution as a backdrop, however, and if one can be completely objective, a proper conclusion is that he has not done "good."  The primary reasons, if you leave out moral and religious motivations, are that he has consistently neglected to follow the very Constitution he swore to defend and protect.  He has not done so; and this is not due to a lack of familiarity with said Constitution - quite the contrary.  Many (not to be named here) have pointed out that much, if not most, of his actions have violated constitutional mandates, such as assuming powers strictly reserved for congress (and don't even get me started on them), making "law" by fiat - usurping judicial authority (and again, they're a bunch of gems, aren't they?), and acting unilaterally when, as just previously mentioned, the in-place system of checks and balances are ignored.

One appears to be a bit of a blowhard who has, by some accounts, a checkered past - notwithstanding the opinions of his children.  He seems to have come late to the conservative party - when the lights are dimming and it's heyday is waning.  (One might surmise this author is less than enamored with the GOP.)  Perhaps his motivations are honorable but it's difficult to tell where he really stands on some of the issues and what he'll be capable of actually doing about those he seems to have more clearly articulated.

The other seems to have a pretty significant amount of baggage with regard to truth, affiliations, kleptomania, George Soros, patriotism, honor, health, narcissism, favors owed, graft taken, need I say more?

Place candidate one's motives alongside the Constitution and one will find at least some adequate measure of harmony.  Perhaps not perfect - and of course there's that bloviating personality.

Let's look for a moment not to the candidate himself but rather to those who support him:
Ben Carson, James Dobson, Alveda King, Mike Huckabee, Herman Cain, Allen West, Franklin Graham.

Not a list of nobodys.  In fact, without exception people of honor, dignity, patriotism, and respect.

Candidate two.  Constitutionally a potential carbon copy of he who shall not be named.

The possibility that this country will continue down a hellish path to a point of no return is virtually assured.

Lord help us...if you think we still are worth helping.  I, for one, would not blame you for abandoning us as a nation.  I certainly don't mean those individuals who love You and follow your commands; You promised to never leave us nor forsake us.  But you famously did remove your hand of blessing from Israel many times when they got way off the track, so to speak.  We too have derailed.

Vote your conscience - but VOTE.  Not to do so is virtually a de facto vote for she who will not be named.

Posted by BassHorn at 16:18 No comments:

I was reading a posting from GodTube which referenced Timothy McVeigh's final words.  They were not from one who knew his creator at all.  Pity.  Even he could have been forgiven.

...began thinking of my students as I often do...and also talking to another in particular.  Often I pull up the attendance chart for my classes and pray over each student - knowing that some do in fact know and love their Creator while not knowing the "hears status" of many of the others.  It absolutely breaks my heart to know that not all of them will make it to heaven.  If I had my way there would be no question - but - I'm not the boss.  They all have a decision to make at some point.

Unfortunately, rules being what they are, I'm prevented from open dialogue regarding saving grace.  However, I do my best to live out my faith hoping that my students will learn about He in who's love and grace I trust.  Do I fail?  Let me count the ways.  Many days I can't believe they pay me to do what I do...but, of course, there are other days; I'm usually open with the students when I'm having one of those days when there ain't enough money in the world.

I have been very blessed in my career as an instrumental music educator to have some great students.  Ok, not all liked my brand and there have been those who were openly antagonistic toward me.  I've learned from them all.  However, in my present position it's like, in the words of a former colleague, teaching at Disneyland.  I had often dreamed of having students who were well motivated and who's parents were totally supportive of the cause.  Such is the case here.  Being able to form close bonds with the students as well as producing some really fine music has truly been a blessing.  It's these close bonds that make me all the more concerned about their eternities.

I will one day know for certain...I hope to see them all.

Attended the memorial service for a colleague yesterday.

Kathy Slade was a 1973 graduate of Catalina High School.

What struck me was that, though we went to different high schools, we graduated the same year and likely had mutual friends. We shared similar interests, married one year apart, and followed somewhat similar paths.

Pity I didn't know this before now.

I teach in a small school district in Tucson. Everybody knows pretty much everybody; or should I say, we're acquainted with nearly everyone.

Don't be afraid to let people in. Ofttimes were hesitant to mix our personal lives with our professional lives; while it's not necessary to go overboard and make all your colleagues a "BFF" we should at least get to know them past the surface. You never know what you'll find out.

Don't wait to get to know them at their memorial.

Posted by BassHorn at 14:18 No comments:

I am so sorry about the loss of your dad.  I'm also sorry for the crass and thoughtless comments I've heard you've received.

People who would make such comments are beneath your contempt and your decision to put aside your social media accounts is wise...beyond your years.

Please, as you heal, try to remember the strengths your dad had.  Yes, he made us laugh.  But there was much more to him than that.  He, along with a precious few others, knew how to make us laugh while also touching us deeply.  We could often identify with the characters.  When we laughed we laughed at ourselves.

Depression is a terrible, terrible thing and virtually no one is completely immune.  I can only imagine the depth of the pain your dad was experiencing and please know that his actions were not meant to hurt you or your family.

In time, you will be able to remember him for his greatness and some of the pain may subside.

Don't be afraid to talk frankly to a close friend.  Be open.  Your dad would want you to be happy and avoid the pain he felt.

Much love to you and your family...

Posted by BassHorn at 15:42 No comments:

First off - it took forever to get logged on to this blog since I haven't done so in a while and Google has changed their logon procedure since my last.

This is probably a good thing since it gave me time to cool off...a bit.

So, I'm supposed to get a new  phone via FedEx.  (You probably already know where this is going.)

I figured, "no problem, they never get to my house until after I'm home anyway."

The one time I have to actually sign for the package they get there at, like, noon.

So I thought "I'll just call and arrange to pick it up at the FedEx location."

The phone automatron made it clear that the package had to be signed for at the delivery location specified and that they would try again the next day.

Well, I won't be there tomorrow either!  It felt like an eerie combination of Catch 22 and Groundhog Day.

Finally reaching a human (who did his best to replicate the English language) and already at a frustration level of which I am not proud, I managed to explain my predicament to the gentleman who contacted the local FedEx facility (whilst I waited on hold) and finally assured me that I could, with enough ID to board an international flight, get my phone if I was willing to wait until near closing time.

In retrospect, why didn't I arrange to have the package delivered to my school?  Nah, that would have made WAY too much sense.

Posted by BassHorn at 14:32 No comments:

Here is all the drama you need in a day - crammed into a minute or so... 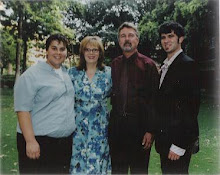 The Family 'bout 14 years ago